The longer I lead remote teams, the more clear it becomes to me, that there are things which take on an outsized importance within a remote team – especially within an all-remote organization.

(an aside: I appreciate the definitional challenge of calling an organization “all remote” – remote from what exactly? “Distributed” is an alternate term that I appreciate more but, has yet to gain a ton of traction)

Some of the things that take on an outsized, and sometimes surprising, importance, that I’ve written about in the past:

What’s starting to appear more and more to me these days, is how important, or perhaps how impactful, the tangible becomes.

What do I mean when I say, the tangible?

Over the course of the last year, we’ve built out an in-house ETL solution that we call SQLT – pronounced “Sequel Tee” – and had to work really hard to gain buy-in from folks within the organization to start using it, rather than defaulting to other solutions that were more familiar or more comfortable, for whatever reason.

Once we had a couple dozen folks who had committed code using SQLT, I had some stickers made, and I mailed them to those who had a commit on their record – they were a surprise, no one was aware of them coming. I trucked down to the post office and sent a dozen envelopes to three different continents.

I have a few left! They look like this: 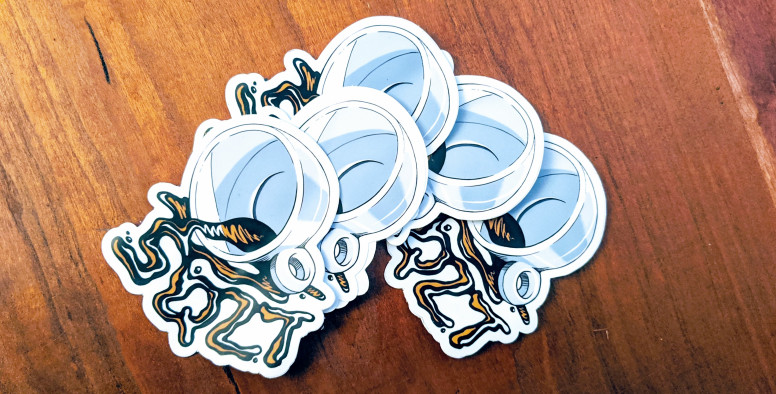 …and it was a great hit! Folks really appreciated them!

I wonder, if we were in a co-located environment, if it would have had much of an impact. Since, in an in-person workplace, you have many, nearly constant, tangible artifacts of your work – an office, a desk, a cafeteria.

In a distributed workplace, the tangible is much more rare: your workplace is your home, or a cafe, or another shared space – areas that aren’t exclusively the place for work, and often serve many duties.

You don’t often interact with your colleagues in the flesh: this is part of what makes regular meetups or conferences an important source of connection and re-connection.

So too, I think, receiving something you can hold, something that comes in the mail, from your otherwise largely ephemeral colleagues, takes on an outsized impact in a distributed environment.

I used to send my teammates postcards on their birthdays and their Automattic hiring anniversaries (naturally, Automattiversaries) – something that would probably seem a bit odd in a co-located workplace, but in a distributed one, it really felt like a special token of recognition, a tangible touchstone of the time and the work we’d done together.

Due to the intentionality that phatic communication requires when working remotely, it’s easy for distributed workers to fall into communication patterns that are totally professional: interactions can be purely work focused, transactional, without the kind of socially pleasant borders and decoration that you get for free in a co-located environment.

Asking your colleagues to eat lunch on camera can feel a bit awkward or out of place.  After all, in a co-located environment, which we still have in our brains as the default, it would be odd to ask for! But, part of the distributed organization’s success relies upon us recognizing the things we no longer get for free, what we maybe took for granted in a co-located office, and how we might replace them, or improve upon them.

Like that eating-on-camera piece, I think a birthday or work anniversary postcard would be strange in a traditional office – but it is, not only not strange, but maybe quite important in a distributed workplace.